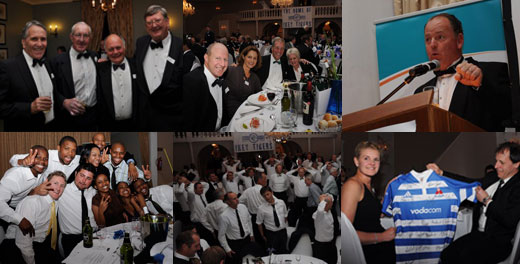 The 2010 Ikeys Black Tie Dinner was held last Friday at Kelvin Grove – an outstanding event and almost 300 guests didn’t miss the opportunity to enjoy Ikeys entertainment at its best while celebrating many reunions in a festive atmosphere.

Kelvin Grove was a fitting venue for the Dinner which was attended by many former Ikeys and friends of our club as well as their stunning partners. Among the invited were acclaimed guests, such as Western Province captain Anton van Zyl, an impressive number of former Springboks and of course Jake White.

All enjoyed every minute of the festivities which included, awards, great speeches, auctions and raffles, culinary delights and of course the wonderful Ikeys party and tangible Varsity Spirit. The event also raised in excess of R100 000 for rugby bursaries and the development of the club.

He announced guest Speaker and World Cup Winning Springbok coach Jake White, who enjoyed sharing some of his countless top level rugby experiences and many a laugh in his outstanding speech.

Later it was time to kick off the auction, which was expertly handled. The magnificent items had the bidders go big in order to raise further funds for UCT Rugby bursaries and club development.  The prizes included  a French U20 jersey signed by Philippe Sella, the French legend of 111 caps, a rugby ball signed by the British and Irish Lions with a special Bushmills Whiskey hamper, a limited edition Rotary gents watch only five of which are – were -  available in SA and as the grand finale a once in a lifetime luxury Serengeti Safari sponsored by &Beyond.

The raffle prizes on the night were of equally high standards but it was the famous “Heads or Tails” game, brilliantly conducted by the notorious Dayne “Danger – you know I love a bit of an audience” Jans that had the guests in stitches. The prize which was battled out by the final heads or tails survivors in a classic Rock Paper Scissors fight to the death, was a Western Province jersey signed by all the Currie Cup players including the returning Springboks. It was later auctioned off while bidders kept at it just to tempt another joke out of the mullet bearing character and UCT first team hooker, who turned out to be a hilarious stand-in auctioneer.

A special highlight was the passionate promo video for the latest Ikeys initiative – the Ikey Foundation. Ikey Tigers coach and former SA 7s captain Kevin Foote introduced our new supporters club that is bound to change the face of UCT rugby, welcoming back the alumni, giving back to the Ikey family, while developing the club on all levels to ensure a sustainable winning culture based on our proud Ikey tradition.

The 2010 Black Tie dinner will be remembered for a long time and has certainly helped build momentum to help UCT rugby and the undeaniable Tiger within all of us leap further ahead. The excellent management team including Kris van den Berg, Dan Palm, Dave Edgar and June Suckley with the aid of Kevin Foote, Bodo Sieber and many others, including the exeptional crew at Kelvin Grove have lifted a great varsity tradition to another level.

Thanks again to all the sponsors and contributors to the event, but most of all thank you to all the guests who made the dinner so memorable.

We look forward to welcoming as many of you as possible to the Ikey Foundation and of course also to many of the matches of the Ikeys of 2011.

click here to tell a friend about this article

Thank you to our sponsors and corporate partners: