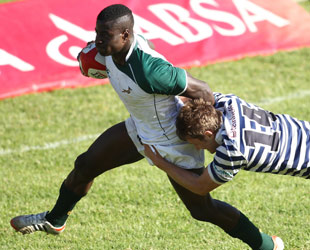 The FNB UCT Ikey Tigers were outmuscled by a physical SA Under-20 side at Villagers Rugby club on Saturday.

The pre-season game consisted of four chukkas of 20 minutes as well as unlimited substitutions so both sides could work on combinations.

UCT played with the wind in the first period of the match and it seemed like it was going to be a close game as the Cape side went into the half 19-12 down.

When they came out after the break the Bokkies piled on the pressure and cruised away with the game, scoring 33 unanswered points to win 52-19.

An area of concern for the UCT management would be the scrum as they were bullied by the powerful Baby Boks at set-pieces as well as open play.

The Cape Town outfit managed to score three tries, but battled to keep up with the physicality of the Baby Boks after half-time as Dawie Theron’s charges hit their stride.

Theron, the SA U20 JWC-winning coach said afterwards he was very pleased with the outcome of the camp.

“The camp and specially the three matches showed us we have a lot of talented players and that it will be hard to choose a final squad. I feel that a lot of players really grabbed their chances against UCT to play them into contention for final squad selection.

“The players responded well after the lost against Maties and I am very pleased with the focus, their application of the game plan and especially the finishing against UCT,” explained Theron.

Ikeys to start with a bang
Scroll to top