Blog - Latest News
You are here: Home1 / Newsflash2 / Another draw for the Ikeys 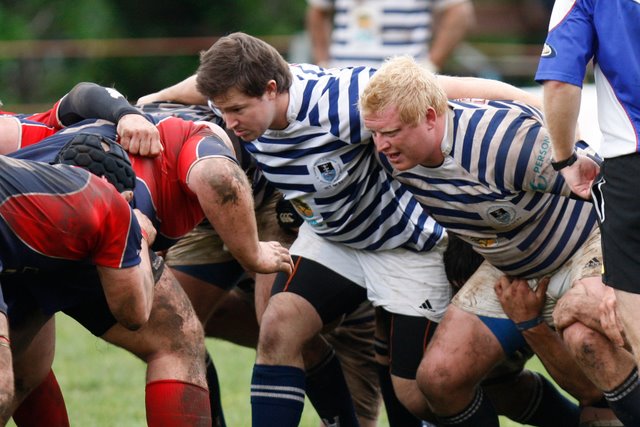 Engage – the Ikeys front row gettting ready (photo Peter van As)
Ikeys fought hard for a 25:25 draw against Durbel on a muddy Green Mile on Saturday. The 2010 season has been littered with draws for the Ikeys which unfortunately means a deficit in the log points department.


The Ikeys, recent conquerors of NNK, entertained Durb-Bell at the Green on Mile on Saturday – their opponents having shocked all and sundry by drawing with the mighty Maties just a week before.

So far this season, which is fast reaching an end, the Ikeys have drawn with Hamilton’s, Helderberg, SK Walmers and, now, Durb-Bell – who were second on the WP Super League log before the weekend.

UCT did pick up a four-try bonus point on Saturday in their 25-25 draw, with young winger Paul Cohen – again – finding himself amongst the try-scorers and also adding one conversion and one penalty.

The home side’s others tries were scored by Hanyani Shimange, Bradley Bosman and Pete Haw.

The Ikeys will next travel to Stellenbosch on Wednesday for a midweek clash with Victorians – Stellenbosch’s second team (kick-off 7.45pm).

Gallery by Peter van As: