Butch was a star school rugby player for Rondebosch Boys High, who moved on to UCT to play first for the under 20’s, before moving up to the first team and having a stellar career at Ikeys.

Butch was part of a golden era at the club with the team lifting the 1974 Western Province Grand Challenge (the old equivalent of the Super League). The next UCT team to win the league was the 2011 Varsity Cup winning side! 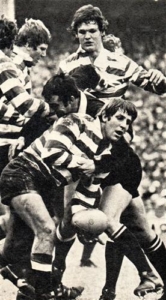 Butch played for Western Transvaal u20 (while in the army) and  Western Province under 20 and Senior sides. Notable selections and games were in 1976 against All Blacks and Currie Cup Final against OFS. Butch was selected as a reserve for the South African Universities who lost 21-9 and then started for WP in the famous 12 – 11 win against the All Blacks where another Ikey legend, Chris Pope scored the winning try. The game was played in front of a crowd of 45 000.

He was then selected for SA Gazelles (SA u23) but could not play because of the damage done to his ear against the All Blacks.

His left knee was badly injured in 1977 at the Springbok trials in Pretoria in an air tackle (now punished with a red card) from Moaner van Heerden. This injury gave him the opportunity to finish his studies and pass the PAAB board exam before returning to play for Villagers in 1980/81 in a National Club championship and Grand challenge winning side.

He recalls graduating with a BCom at the end of 1977 on crutches and has recently had that left knee replaced. Butch was involved in the infamous lion mauling incident in early April 74 when Patat Theron was mauled by a lioness at the Zoo next to the university. He carried Patat on his shoulders from the lion’s den to the car and then to casualty at Groote Schuur hospital in the early hours of the morning. 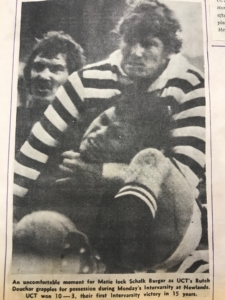 He gained great pleasure out of coaching the UCT 2nd team from about 1989 to the early 2000s together with Ian Healy while Alan Solomons coached the first team and during this period became a WP under u19/20/21 selector. Butch was also involved in the support and coaching team of the great Ikey side of 2004 which won the 2004 Intervarsity. Read that story, here.

Ivan Nurick in his book “Hooked on Varsity”, published in 2009 summed up Butch as “The star lock of the 1970s and another great Varsity man”. Butch has been one of the Ikeys top supporters over the years regularly attending Ikey games and functions.

Butch is leaving South Africa to move to France on a permanent basis. We caught up with him on his plans as well as his thoughts on rugby. 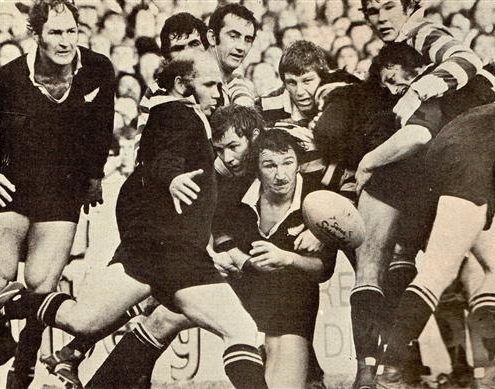 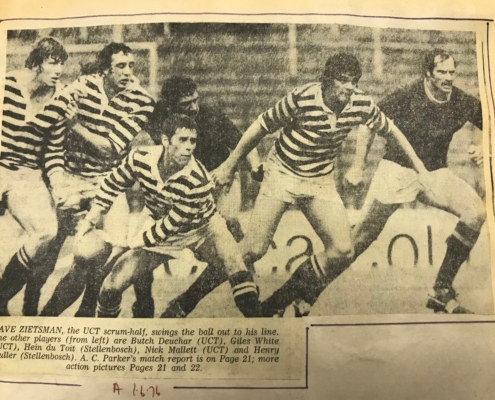 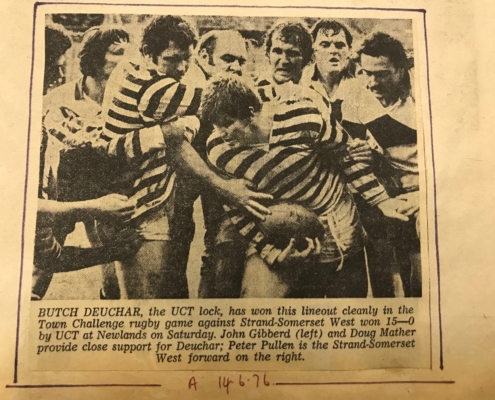 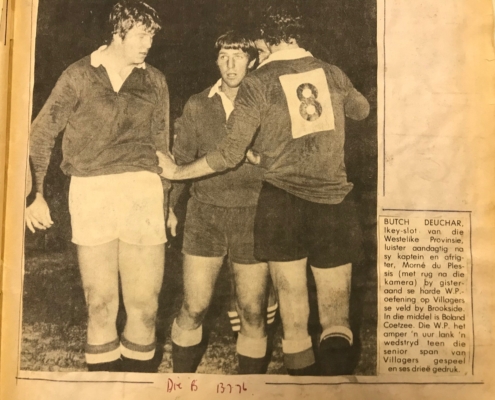 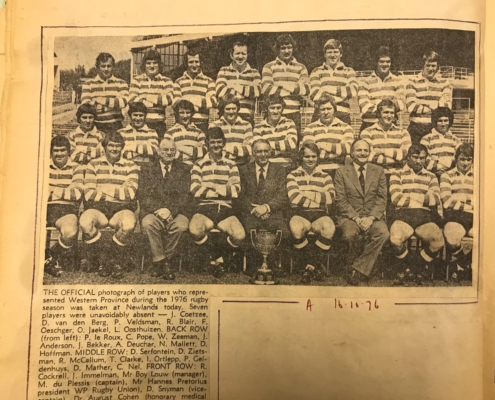 Where in France will you be moving to and what are your plans?

We are moving to a small 12-13th century fortified village called Puylaroque about 100kms north of Toulouse, where we’ve bought a house together with my brother-in-law and partner.

Are you planning to watch any of the local French rugby?

Yes, very much so. The nearest local club is Montauban 20km away who play in the 2nd division where another RBHS and WP/Sharks boy Luke Stringer is playing.

Looking back to your Ikey playing days are there any particular games that stand out?

Yes, very much so. The first being a narrow loss for the First XV to Stellenbosch at Coetzenberg in 1973 as a 19-year-old where their winger Oosthuizen stepped out twice on his way to scoring the winning try at the death (the linesman was a Matie player). Morne du Plessis their captain made a comment at the after-match function that Oosthuizen had run up the aisle and back of Coetzenburg stand not once but twice on his way to the try-line.

Then there was our 1974 Grand Challenge victory against Stellenbosch in the final match after both teams had lost to Northerns in the opening two matches. It was the only two matches Northerns won in that Grand challenge tournament such was the strength of the club rugby competition. Incidentally, Alan Cunard and I were still U20 that season.

There was our victory in the 1976 Intervarsity match, the first Intervarsity since 1968. Timothy Brukman scored a brilliant try in a move called Lohore with Nick Mallet and dummy runner Dirk Hoffman. We practised that move a number of times at every practice under the watchful eye of Cecil Moss and never once tried it in a match until Intervarsity. It effectively won us the match as Brukman scampered in under the poles untouched from the 22meter line. When the opportunity arose from a scrum 20 meters in from touch the move was not even called…the whole team just knew it was on.

That 1976 WP win over the All blacks was a game that many of us still remember to this day. The backline players tend to get all the glory. Are there any insights or thoughts that you as a forward have on that game?

Yes, I recall early on, our hooker, the only non-Rondebosch boy in the tight five Rob Cockrell (RIP) broke away with the ball and we were a bit slow in support. Well, the whole All Black pack just ran over him and ripped his pants off and the game was stooped so that a new pair of pants could be brought onto the field. Skipper Morne took the opportunity to call us together to tell us if we did not keep up each other’s arses for the rest of the game we would be history, well for the rest of the game we had all-mighty clashes with the All Blacks and as Kobus Immelman regaled at a recent wedding we proceeded to ”f…k them up.

Later in the game, there was a lineout on our line and Sid Going as I had seen him do before dummied a pass then tried to duck through the back of the lineout and I dived on him, the whole All Black pack then ran over me and left me dazed. I could barely hear Morne say, “get up you cant show them that you are hurt” in a whisper. Well, you listen to your skipper. As it was, Going had to leave the field, they were 11-0 up at that stage and he had to be replaced, when he next saw the game, they were down 12-11 with virtually no time left. I remember within that period having a midfield 22metre scrum where we absolutely annihilated their scrum…the backs then stuffed up by kicking directly into touch, hence their lineout on their 22.  I don’t know how but we managed to scramble to win it. (The score was now 11-6 after Bossie Clark had managed to score just prior)

Divan managed a brilliant pass out wide and again we lost the ball in the centres with the All Blacks kicking the ball through to Dawie Snyman who picked the rolling ball up off his toes at full pace and started a counterattack and brilliantly passed to Morne whom in turn passed to Chris pope who crashed over in Bryan Wlliams tackle. Bossie Clarke our left wing was outside Morne and could also have scored if Morne had passed to him having scored the earlier try. Blair converted from far out wide.

At some stage earlier I had had my ear ripped apart from a Brad Johnston rake and had to leave the field to have it stitched up and returned to the field, to this day I can’t remember at what stage of the match that was.

What are your thoughts on the state and standard of club rugby in the Western Cape?

Well firstly the clubs have been denuded of the top echelon of players, they never play for their clubs so young and fringe players never get the opportunity to play with and against top players so the education, learning process is diminished. There are in my view too many topflight professional games and the public eventually get bored, and the players get worn out.

Reduce the number of topflight pro games and let the professionals join the clubs and play for their clubs occasionally.  They will help to increase the interest in local club rugby and pass on their skills to the younger fringe players and I am sure the pro’s will enjoy the experience. I remember learning a lot as a youngster playing against top players. One needs to increase the player base and interest in rugby against many competing interests.

Back in your playing days, players who were not studying held down full-time jobs and had to fit in training, travelling and games. How did you cope with these demands?

It was not easy, so I took a bit longer to get through my studies. Luckily I had Prof Kritzinger (Dean of the Faculty of Commerce) to assist and Alex Watson (nee Adams) a fellow student unselfishly spent hours with me trying to get me through my exams. She was an absolute superstar.

You are well known for your knowledge and expertise when it comes to lineouts and scrummaging. What would you say are the most important aspects of both these disciplines?

In lineouts speed, timing and explosiveness and working on the relationship with your hooker. Because of the current rules working space in the lineout is important but I find things get too complicated. Make it simple and don’t confuse the hooker.

In scrummaging there appear to be too many wrestling matches, stability and tightness is the key, get low and immovable. I recall practising stability where our loose forwards would breakaway, run 5 meters back and then rejoin the scrum while we as tight forwards would remain immovable against a full 8, moving neither forward sideways nor back. All under the watchful eye of Cecil Moss.

If you could change one rule in the modern game what would that be? 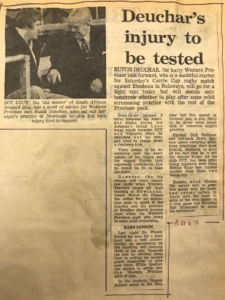 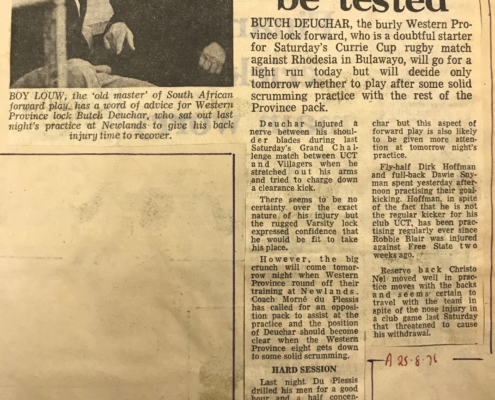 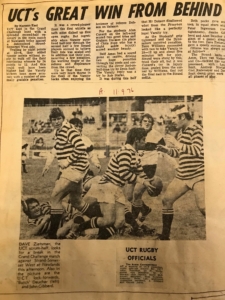 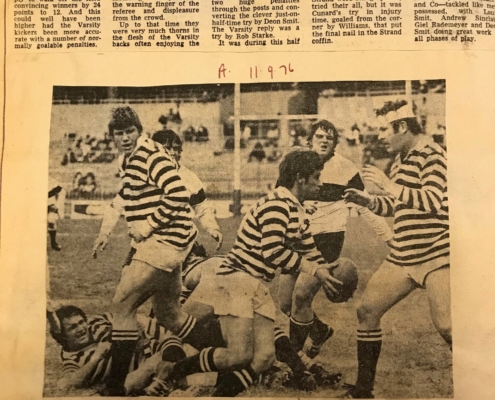 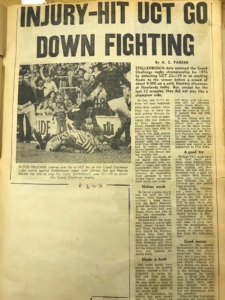 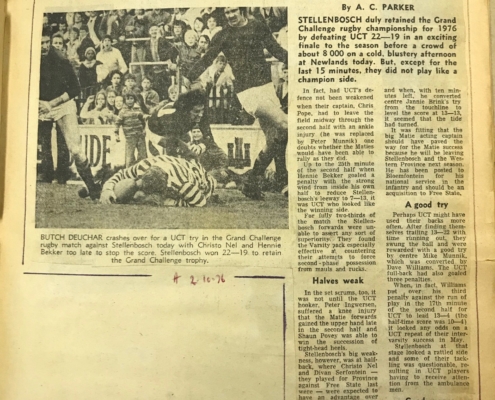 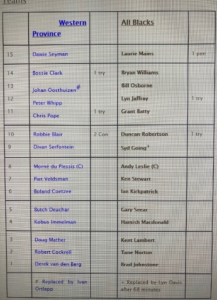 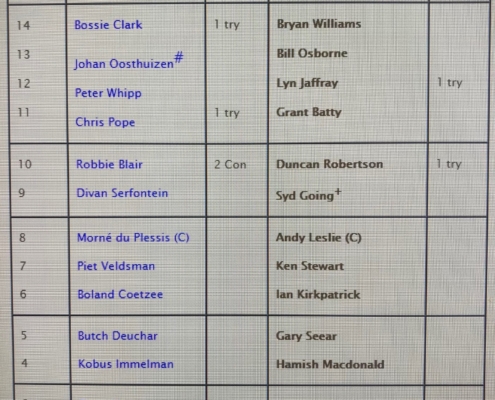 Butch Deuchar is one of the best lock forwards to have played for UCT. That is quite a statement but fully justified. Lock forwards do not fulfil their potential unless they have special rugby qualities.

They have to be big, strong, tough, possessed of a thing called ‘Mongrel’, and the burning desire to make opponents eat dirt and feel the sting of defeat. Butch had all of that and more. In tandem with another outstanding Rondebosch Boys High School product, Kobus Immelman, Butch played outstanding rugby for W.P.

UCTRFC is proud of Butch, sad to see both Butch and Fabienne leave South Africa but we understand and wish them all the very best in France.

Catching up with 2021 VC Captain, Liam Greenhalgh
Scroll to top