Blog - Latest News
You are here: Home / Newsflash / A win is the only comeback – Foote 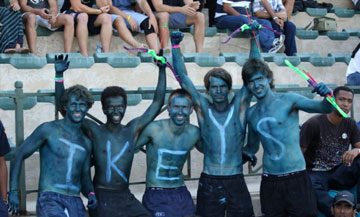 Ikeys coach Kevin Foote and his team were left licking their wounds after Monday’s 16-37 Varsity Cup loss to the defending champion Maties… but the former FNB UCT captain had a very simple solution for them to bounce back.

”We must win against UJ,” said Foote when asked about his team’s potential riposte after their first defeat of the 2011 season.

“We let ourselves down… we let our supporters down… Monday wasn’t great, but the nice thing about the Varsity Cup is that you’ve got a game the next week and it’s as good a time as any to bounce back!”

Foote added to varsitycup.co.za: “We’ve licked our wounds. We’re not denying that we played badly, but there’s no point harping on a bad loss… just as there’s no point crowing about a victory.

“Already we’ve had a big start to the week at training and the guys will be giving everything that they did not give out there against the Maties come Monday against UJ.”

FNB UJ, like UCT, also saw their unbeaten run come to an end in the Varsity Cup, as they slipped to a 23-38 loss to FNB Tuks on the same day.

The University of Johannesburg also lost at home and Foote is expecting a similar backlash from them come Week Six of the 2011 Varsity Cup this coming Monday.

“It’s a must-win game for both teams,” he admitted. “There’s just two games left and then it’s semifinal time – so nobody can really afford to lose in terms of that home semifinal being up for grabs.

“That said, our only focus at the moment is UJ and we cannot wait to get the chance to put things right after this week.”

The UCT coach is hoping to have forwards Levi Odendaal and Don Armand back (after they missed the Maties clash with injuries), but inside centre Adrian Kritzinger remains sidelined for at least the next two weeks .

“We missed Kritz’s leadership,” said Foote, “and guys like Levi and Don would bolster any team.

“It’s good to have them back and the timing could not be better with three of our SA Under-20 guys, Eben Etzebeth, Nizaam Carr and Ricky Schroeder, all going on tour to Argentina.”