On 5th September 2015 the Annual Mark Jordaan Memorial fixtures took place between two great Cape Town clubs. The University of Cape Town Rugby Football Club is in its 131st year of existence and False Bay RFC have clocked up over 85 years. During this time, there have been many great players that have moved through the ranks at UCT and later moved on to FBRFC. Of course that was more prevalent when student membership was a more stringent commitment than it is today, but still there are few players who have played at both clubs. A number of administrators and coaches, have also contributed to both clubs, and are fondly remembered by both.

Most famously, this resulted in the Grand Challenge victory of 1972, after a number of players led by John Le Roux & Gus Enderstein came to play at the Bay after their time at UCT. Whether it was the Basil Bey or the Louis De Waal eras before that, or the Nick Mallet era thereafter, the relationship has served both clubs. So whilst a rivalry, the relationship between the clubs is symbiotic.

FBRFC are pleased when UCT performs well and vice versa. This great rugby friendship was formalised through the Mark Jordaan pre-season fixtures between the two clubs, which is dedicated to his memory. This is also an occasion where all the other players who have represented both clubs and who may have since passed on are also remembered. 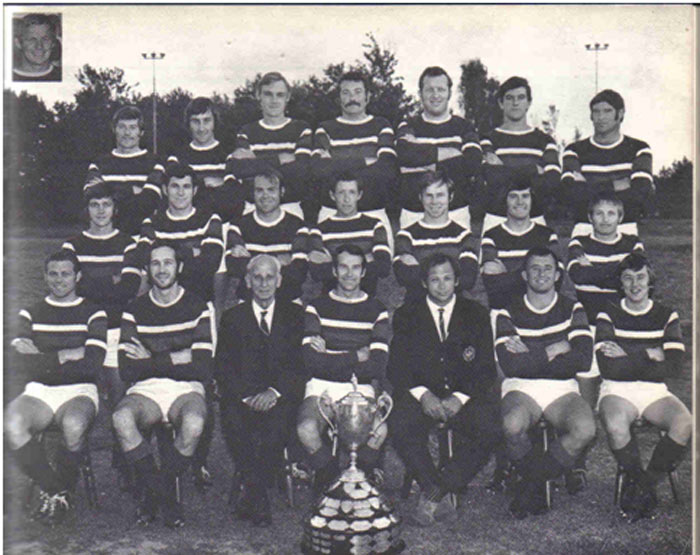 The annual Mark Jordaan Memorial Rugby matches have been contested between the UCT and False Bay Rugby Clubs since 1989. The trophy is awarded based on the overall performance of all participating sides on the day, and forms a tribute not only to the late Mark Jordaan, who played for both UCT and False Bay RFC, but to the great history and relationship between the two clubs. Indeed Mark was the middle of five brothers who played their rugby at UCT and at False Bay, under the watchful eye of their father Hans Jordaan, a legendary False Bay supporter.

Mark attended Bergvliet Primary School before moving to SACS at the beginning of Std 4.  There he captained the A sides for most of his junior and high school days. After his time at SACS, Mark studied Building Science at UCT where he played for the U20A and the 1st XV.  He was also chosen to play for the 1974 SA Universities under 20 side, in the company of a number of subsequent Springboks. He and his legendary brother Brent are one of only five pairs of brothers to have ever played together in an Intervarsity game for Ikeys.

After graduating from UCT, Mark joined False Bay RFC and played first team until 1984. Besides rugby, Mark enjoyed surfing, hiking, camping and outdoor life in general. After retiring from serious rugby, he and a group of friends formed the first ‘Young Crocks’, or ‘Jocks’ social side.  He played for this side until his untimely passing away on the evening of Easter Sunday in 1987.  Besides his many achievements, Mark is remembered by those who knew him for his wonderful humanity and sense of humour in never taking anything too seriously.

Like the Jordaan brothers, many players have represented both clubs, over the years, and this Memorial Day also serves to bring those people together and to revive old friendships.

While UCT have remained in the top flight of club rugby, False Bay have experienced some ups and downs in the recent past, but are currently very strong and in a very healthy state, with good depth in all teams and with a competitive junior section. As a result, this year’s matches played at False Bay were much closer than in recent years, with most of the teams competing for log positions against each other. False Bay first XV won 30:14 to take second position on the Super League A log and to finish the highest of the non-varsity teams. In the 2nd XV game both teams were in with a chance to win the league and UCT triumphed to take the honours. In the under 20 section the teams drew 20:20 and UCT finished just one point above their hosts on the log. A number of ex Ikeys have played for False Bay over the past year including Dayne Jans, Gareth Topkin, Graham Knoop, Justin Van Winckle, Wes Chetty and Ash Wells.

Nic Groom Features for the Barbarians
Scroll to top