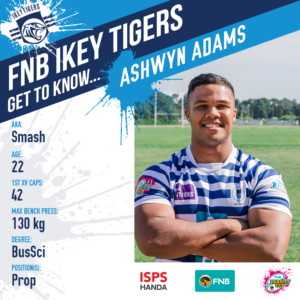 Meet the club’s prop, a self-proclaimed hopeless romantic with a love for the club that literally radiates through his words. Adams sits down with us to talk everything rugby and what it is like being a senior player for the UCT Ikey Tigers

Yet another Rondebosch Old Boy graces our club with his skill, charisma and talent. Adams is no stranger to the rugby world, he played for Western Province U19 in his gap year and recalls that “it was one of the toughest years of my life”, he explains that playing for WP gave him a taste of what its like to be a pro and it really puts your body to the test.

Aside from rugby, Adams loves a good hike (you are welcome to send any suggestions his way) or you might find him at a hip hop and rap night at a club near you. He explains that he has yet to write his own rap song, but enjoys imitating.

Adams is definitely a family man, and dedicates every Sunday to this – he explains it forms part of his pre-game ritual.

Adams explains that the balance of varsity work and rugby takes dedication and ample planning. “There is no time for procrastinating and your time management skills need to be great”.

He checks his schedule at the beginning of the semester and makes sure all test clashes are taken care of with plenty time to spare.

Don’t expect to see Adams on campus on match day because a late morning is a must, a light gym session and some major chilling is all that is on Adams’ agenda. While he explains that he doesn’t get nervous anymore, when the team runs out and sings the national anthem, he gets emotional each and every time.

“You just look up and see your family, your girlfriend and your friends and you realise people are coming to watch you and it is special”

Rugby truly is a sport that puts your body to the test, each and every time a game is played, it might be your last. Adams recalls in Matric (2015), he was unable to play rugby for the year due to a broken wrist.

“It takes a lot of mental strength to know you are aren’t going to touch a rugby ball for a year but you have to show up at practice,” while Adams explains that it was challenge he recalls that it was good for him in rugby, his rugby career and life in general.

While Adams says “he still gets the feeling that he has massive shoes to fill” when talking about playing for the club, we think the Young Guns are looking up to you with serious pride.

Catch Adams on the field at our home and away games at UWC (Monday, 17 February) and Stellies (Monday, 9 March).

Home games at The Green Mile: