2019 League season coming to a successful end for UCT RFC

You are here: Home1 / Ikey Tigers2 / 2019 League season coming to a successful end for UCT RFC

2019 League season coming to a successful end for UCT RFC

The 2019 round-robin section of the league came to an end this past weekend and will now move into the knock-out phase. The league was delayed due to a referees strike against recent abuse on and off the field. 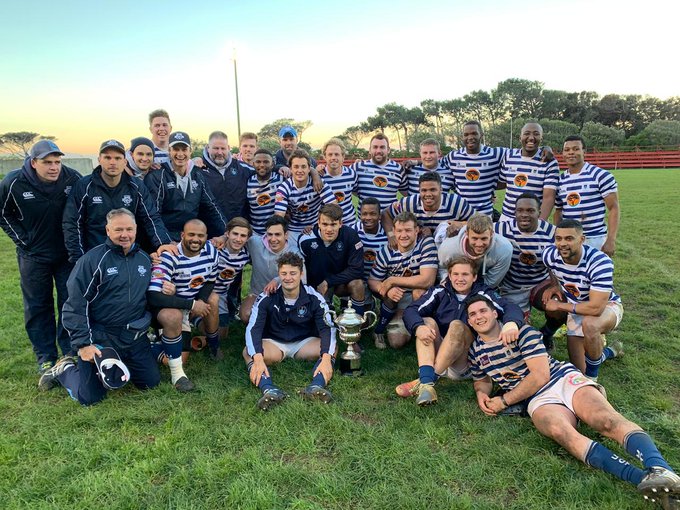 The 1st team finished second on the log, ending a mere 2 points behind Maties who ended top. One of the years talking points was Victorians pulling out of the league early in the season. The standard of rugby in the Super League A has been very good and competitive, Maties beating Durbell 42-33 in the final game to end top.

The 2nd team finished third in the league, with False Bay taking top spot. The writer was present when the 2nds lost to False Bay late in the season, a game that could easily have gone the way of the Ikeys. In this very competitive league the margins are very small.

The thirds finished fourth in their league, a strong False Bay side taking top spot.

The under 20 A finished joint first on the same points as Maties, just losing out our points difference to the boys in Maroon. This under 20 team has continued where last years team ended and also made the semi-final of the Varsity Cup.

The Lady’s swift team have continued to improve and in years to come should become one of the top teams in the Western Cape.

To get some feedback on the season we approached the captains of the 3rd and Swifts teams for their thoughts by a way of a Q&A.

Q & A with Captain of 3rd Team, Zade Bester

Unwinding from a long season, what are the positives and highlights of the 2019 season?

A highlight other than fines, of course, would be the game against Tygerberg on the Mile. Everything just seemed to click that day and we put on quite a show of flare and running rugby. The 100m try off their missed kick comes to mind immediately.

The other massive positive was the team culture we created. Great mixture of guys who had been around for a bit and new faces. It really felt like a family environment from the coaches, managers, physios to the players. Everyone got along, the bear show really was in full affect this season.

For me personally, one of, if not the most enjoyable seasons I have had at the club.

Who were your toughest opponents this season?

False Bay. Only because of the point at which we played them this season. We played the other two (Durbel & Maaties) too early and had not really hit our stride yet, when we played False Bay we were high on that winning feeling and full of confidence, they were unbeaten so it was a tough one.

Did you manage to keep a core group of players for the team or did injuries and players stepping up have a major impact?

We managed to keep a core group of players, which played a big role. We did lose a few key figures to injury and going abroad to take on new challenges and adventures but luckily we had a great group of guys sitting in the wings chomping at the bit to contribute and keep the team gees going.

How have you found the impact of the introduction of the IPL pre-season tournament on the Ikey’s rugby sides in preparation for the league season and the impact on the rugby club as a whole?

I think it’s a great initiative, not only does it give players a chance to showcase themselves one more time, leaving coaches with something to think about but also from a social standpoint and I don’t just mean the beers but more players from different teams or age groups being able to interact. It removes those barriers of 1st vs 3rd team player for example and pushes a one club culture. It reminds me of how it was when I joined back in 2013.

Of course it is also great to get some playing time under the belt so the body and mind know what to expect when league starts.

You recently enjoyed the annual players formal out at the brass bell in Kalk Bay, any team/individual awards from your team?

Nope, although Ant Tennick received what we are calling the yellow jersey for missing the train back and having a short term amnesia bother him for the rest of the day haha.

With a successful season, we would a imagine a fair number of fines evenings. Who’s your fines master and what’s your drinking song?

Our resident fines master has been Ramaano. My drinking song is a little provacitive and is a remix of the classic Frank Sinatra I love you baby:
I love you Zadie and if its quite alright,

I love you Zadie,

Trust in me when I Say

Most unique drinking song amongst the team?

I would say Zuks but that one really can’t be repeated its very spicy haha. Maybe ask one of the lads to share it with you in person. I know the crowd favourite is Ramaano’s he has been given the John Cena theme song and gives us a little show when its being belted out by the lads.

Any other interesting stories related to the teams 2019 league season you can share with us?

We hosted our own little in team farm style wedding this season and would like to wish Megan and Maddock. We wish you all the best in the future on your farm, we hope the cattle to be plentiful and the dams to be full! 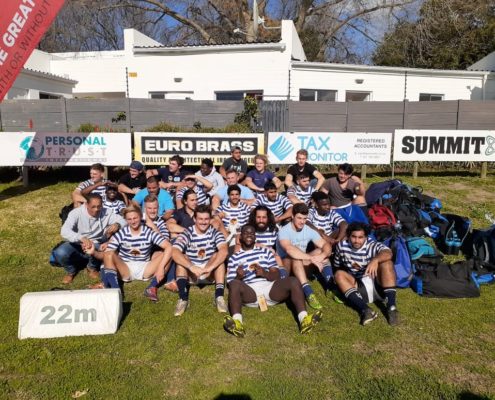 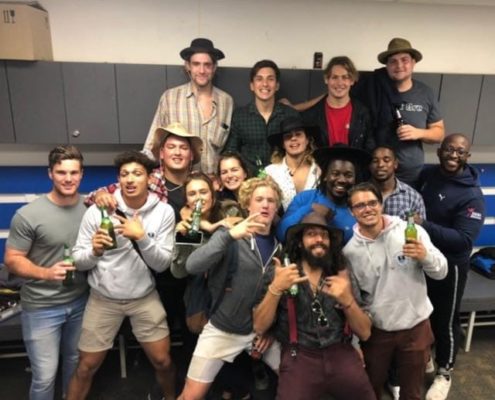 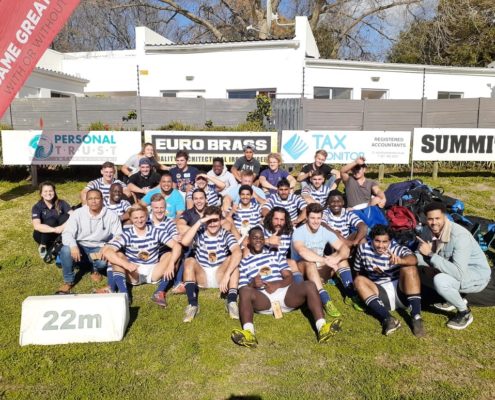 What are the positives and highlights of the 2019 season?

Our highlights of 2019 mainly lie in our integration into the Rugby Club. We remain hopeful that the club marketing strategy will incorporate the team beyond O-week at the beginning of the year. This is likely to boost numbers. We retained players from last year and this has been key in maintaining the team into its second year.

Who were your toughest opponents this season?

The Maties Ladies Team – they trump us in terms of numbers by far. We seldom have nearly enough fresh legs after half time but I trust with the growth pegged for 2020, we will give them a run for their money next season.

Did you manage to keep a core group of players for the team or did injuries and players stepping up have a major impact?

We were able to retain a few players from last year but their waning commitment due to a larger academic workload made it difficult to grow. This saw us forfeiting several fixtures due to poor numbers at training and on game day. The below average numbers meant that the absence of a couple of injured players took a huge toll on the team in terms of numbers.

You recently enjoyed the annual players formal out at the brass bell in Kalk Bay, any team/individual awards from your team?

Do the team have any team or player songs, and if yes, which are the best?

We are working on team morale and hopefully building a culture where we bond in song pre-game. However, we currently have a very spirited War Cry .

Any other interesting stories related to the teams 2019 league season you can share with us?

It was a tough journey being matched up against some of the best teams in the Western Province in our initial tournament. The team is far from being tournament fit and Monday training after a weekend of fixtures was always tough! Following this baptism of fire into the league, our performance improved as we played in the B league with younger teams. We learnt a lot from this experience. I believe we would have benefitted more if we played the sevens format of the game consistently – considering the numbers in the squad – as we build towards a full 15s side and (one day) a separate 7s squad. From her stellar performance at the league fixtures, one of our players – Simamkele Jaho – was selected to train with the U20 Western Province team. 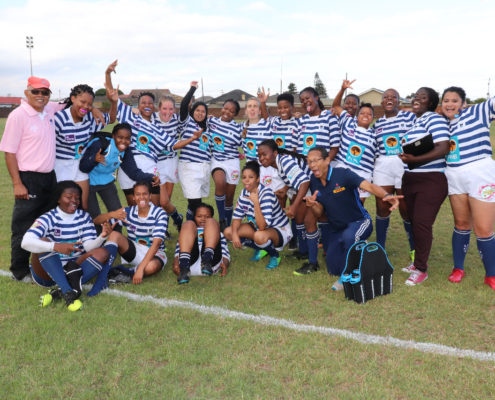 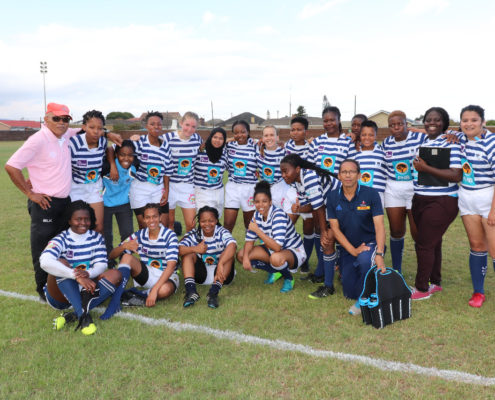