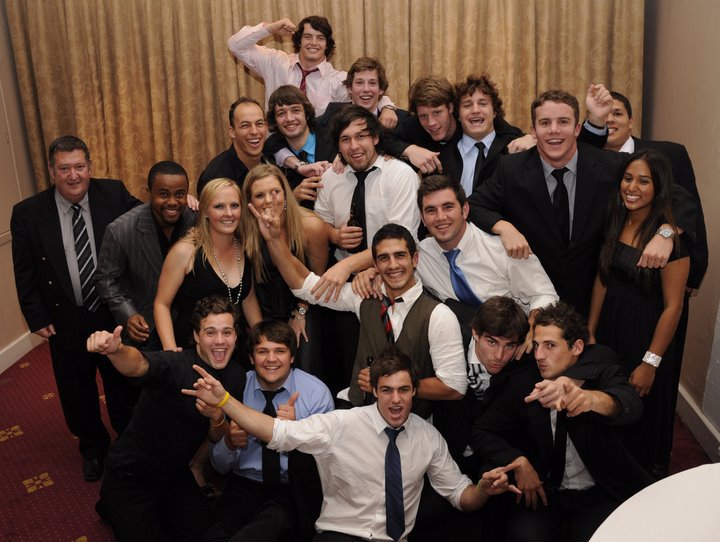 Last week’s Ikeys players dinner, was again held at Kelvin Grove – this year the odds were 3:1 odds against, but again, the venue is still standing unharmed and no major law suits have been filed against the club. The dinner was attended by 150 players, managers, physions, coaches and partners.

Building on last year’s excellent event, it is safe to say that the revival of this great varsity tradition continues.  Awards, speeches, great food, games and the odd down down competition made for an epic Ikeys party that eventueally moved over to Tiger Tiger who had bravely opened their doors to host the Ikeys afterparty.

The players and officials went all out in style – some also added the Ikeys twist as per dress code. The famous Heads or Tails game was again phenomenally conducted by the MC on the night Danger Jans and the prize – sponsored by club sponsors New Balance was won by none other than Ikeys legend Stephen Snoopy Knoop, who had managed to adequately bribe the ref.

The 2010 season had plenty of highlights, and an impressive number of Ikeys have graduated to provincial level, which is testament to the quality of teams and players the club produces. We had a heartbreaking Varsity Cup final, plenty of thrilling derby matches – for all our teams and of course a league title that was again clinched by the famous Marais team.

The club’s outstanding performers – as well as some chokers and jokers – were awarded on the night of the dinner.

Team of the year – U20 BABROWS shared with MC MARAIS

Most valuable u21 player – MICHAEL BOTHA

Alan Solomons Trophy for Service to the club: ANDREW DELL