You are here: Home / History / Words of Support for our New Ikey Patron 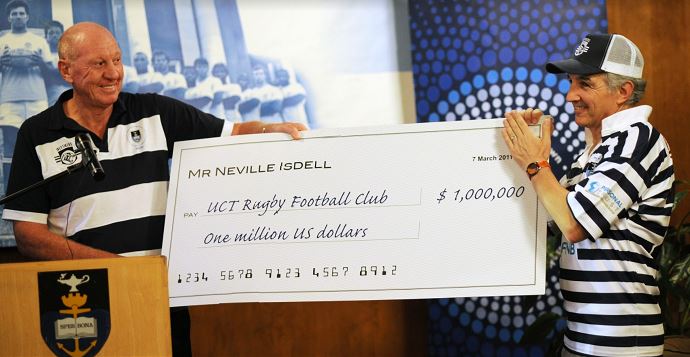 Here within is a collection of anecdotes written in support of the appointment of our new Ikey Patron: Mr Neville Isdell; each written by those who have known him for many years, on and off the rugby field. These anecdotes attest to the essence of a true Ikey icon. 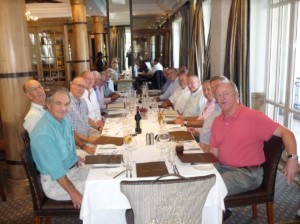 But the French and Italians use the word in a wider and more poetic sense to describe a rugby player. ‘Un Joueur Genereux’ or ‘Un Giocatore Generoso’ is a ‘generous player who gives his all for his team mates; his head in the nasty places, hunting down backs in the open spaces.’

When I look at the photograph featuring Neville on the far-right wall in our new pub, I see such a player bursting through a lineout, and I sense a hunting down that won’t cease until the ball is well and truly dead. I look at that player and I see ‘Un Giocatore Generoso’.

Rugby reveals you. Neville is that, both on and off the field.

Unfortunately, I never played with Neville, as I played for lower teams in my first year in 1965 (Neville’s last year at UCT). However, I have a clear picture of Neville as a tall redhead, very fiery and aggressive – full of Ikey courage, character and commitment. Perhaps I was lucky that Neville left in 1966, which then gave me a chance to make the 1st team – as it was then regarded as important to have a tall loose forward at the back of the line-out.

In the last several years, I was very happy to be Neville’s social secretary in Cape Town. I admired him enormously in his busy life as CEO of Coca-Cola International; he always found time to remember and to be with his Ikey friends and coaches when on his brief visits to Cape Town. At one of these Waterfront social events which Neville hosted, I recall asking him who all the strange men were who were wandering around in the restaurant? He modestly replied that these were his body guards! 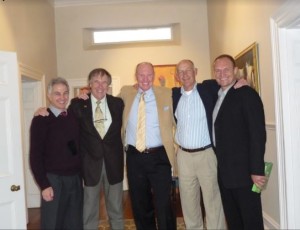 Neville has also helped assist Ikey rugby players in need of financial support with their academic fees – the first being Nic Groom. A more recent recipient was Bradley Janse van Rensburg, whom I am now grooming as my successor at Personal Trust.

Neville has a great passion for and really cares about UCT Rugby. We all know about his generous donation; but it is perhaps not well-known how generous this very busy man is with his time and efforts in doing whatever he can to promote and advance Ikey Rugby. Anything we have ever asked him, he has done willingly without hesitation.

On behalf of Ikey Rugby, I would like to say that Neville being the Patron of our Ikey Rugby Club is so appropriate and meaningful.

I am delighted that Neville has accepted the invitation to become our Patron. I hope he sees it as an honour, for that is how it is intended; but no less than is appropriate – we owe him much gratitude.

He had faith in us when not many did. He put his money and influence behind us and has been a force behind both key developments that we are confident are leading to a renaissance of our club: (i) helping to persuade UCT to agree to our new dispensation; and (ii) assisting us to get on a more stable financial footing. 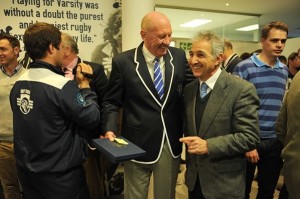 Importantly, Neville’s support is not just material – he has been available to give us advice and counsel; he is always willing to use his influence and force of personality to persuade the powers- that-be and turn them into supporters of our cause; and he has buoyed us with his optimism when it has been most in need.

Neville is a living embodiment of the Club’s values. He is also a passionate advocate of the notion that ‘the most valuable lessons learnt at University are outside of the classroom’. He makes no secret of the fact that his time on and off the field at Varsity was what shaped his character, and set him up for much of the success he has enjoyed in his life. Furthermore, his historical contributions have helped us maintain and grow our ability to offer this exam same opportunity to new generations to follow.

Despite all of this, Neville is a proper Varsity man – he has maintained friendships with the great and the humble for decades after his Varsity days, and has made many new ones in more recent times.

In 1960 a combined UCT-US team went (at the invitation of the NRRFU) on a tour of Northern and Southern Rhodesia, with the main purpose being to open a new stadium in Ndola. On an occasion whilst attending a function, several of the team were caught in a hotel lift that jammed. Included in the group was a young Neville Isdell – whose father was a senior official in the Northern Rhodesian RFU – who was soon to attend UCT, and was keen to be involved with his future colleagues.

As the scene played out, Mannetjies Roux – who earlier had been restrained by the team at Victoria Falls when he believed he could jump in and out of the Crocodile Den before being attacked – was selected as the smallest and most likely to crawl through the narrow gap and get help. Not only did he succeed; but, as a Matie, he saved the tall youngster, who now stands as our proud Ikey Patron.

Over 50 years ago, I had the extreme good fortune of just simply being in the right place at the right time – UCT rugby practice, early 1965. Also present and participating in the practice was a tall, lanky fellow whom I observed to be more than a very useful flank forward. Neville certainly made his presence felt that day; and not surprisingly, quickly forced his way into the UCT 1st XV, where I was also lucky enough to be floating around in the capacity of a utility wing, come centre, come full-back.

That same year, Neville and I were also both selected to represent the Combined Southern Universities Rugby Team, scheduled to play at Newlands against the touring Argentine National rugby team – a great honour for all the Ikeys that were selected, with most of that Combined Universities XV being made up of the ‘Matie’ contingent. 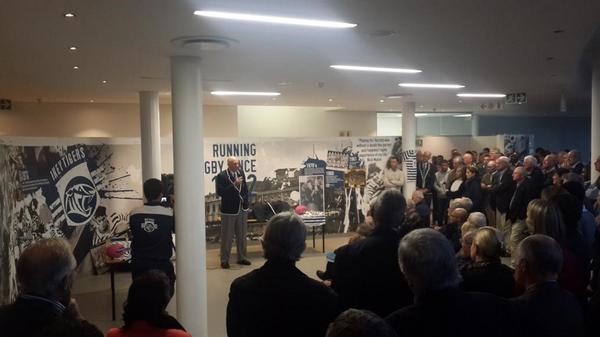 Fast forward many years, we all went our different ways – me as an insurance salesman, and Neville working his way up the ladder at the Coca-Cola. Indeed, we all know of Neville’s huge business success – ultimately heading up the Coca-Cola Corporation, based in Atlanta, Georgia, USA.

Albeit Neville having reached these great heights, his feet were still firmly on the ground, and never ever, to this day, has he forsaken or forgotten his old mates – particularly his UCT rugby cronies of yester-year. In 2008, I travelled to Augusta, USA to watch The Masters golf tournament together with 3 golfing buddies. I took the extreme liberty of calling on ‘Mr. Coca-Cola’, with the intention of him being able to guide me and my 4x ball as to where we should look to find accommodation; what golf courses we should attempt to play; and anything else that we should be aware of in making our visit to The Masters a successful one.

I received a return call from Neville the next day – he informed me that he had allocated one of his personal assistants to attend personally to whatever our requirements were. He had also arranged for us to play as his personal guests of the Coca-Cola Corporation. And, of course, as a guest of Coca-Cola, we were not permitted to pay for anything – which included the entire drinks bill after golf.

Need I say more – everything that followed had been perfectly set up to ensure that our Masters Golf experience was an experience of a lifetime, thanks to the ever-thoughtful and considerate, Neville Isdell. In thanking Neville afterwards, I could not resist pulling his leg by telling him that we did feel a little awkward as guests of Coca-Cola – because all the drinks that we ordered on Coca-Cola’s tab were all in fact Pepsi Cola.

Neville Isdell – a true, modest gentleman, and a sincere friend. I can think of no-one better, or more deserving, to be appointed as Patron of UCTRFC.

Neville was a member of the UCTRFC committee in 1964 when I joined the club from Rhodes. Our friendship goes back some 54 years and over this period the bugger has not changed. This, despite his phenomenal success on the international business scene. Each year he hosted a lunch for his mates. Notwithstanding the presence of several body guards, we talked and laughed and told the same old stories. Neville never sat at the top of the table with the big shots – he moved around making sure to have a word with even the most insignificant of us. 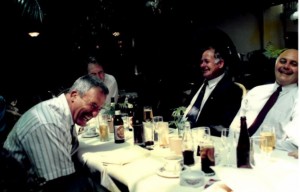 At the launch of his book ‘Inside Coca-Cola’, I asked Neville to sign my copy. I did not read what he had written until I got home. I wondered what he would write? Perhaps: ‘To the quickest foot I ever saw’? Well, no, that wasn’t it. Instead, he wrote: ‘To the softest backside I ever pushed against’. What a man!

In deference to his strong Irish background, I conclude with a prayer for Neville from an old Irish priest: 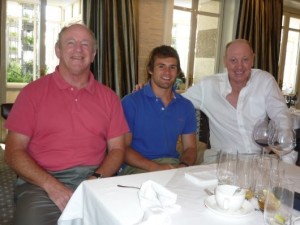 As a proud recipient of the Neville Isdell bursary, I’m extremely excited to hear the news that he will be the new Patron of the Club. Soon after I received the bursary, I was invited to the ﬁrst of many lunches with him whenever he was in Cape Town. He always took the time to catch up, despite his busy schedule. I got to know a bit about him and his business success, but I can safely say the the majority of our time together was spent talking about his varsity days. Mainly how the lessons and friendships that he had formed in his time playing for UCT had helped him achieve success in the business world.

With Neville as club patron, UCT RFC does not only have an international business leader providing valuable vision going forward, it also has a passionate lkey who will ensure the Club is looked after in all aspects.

In late 2013, l was fortunate enough to be chosen as one of Neville lsdell’s bursary recipients. My first impression of Neville – when we sat down with a glass of Coca-Cola to get to know each other better – was that despite his many accomplishments as a businessman and philanthropist, he was equally as interested in my story as l was in his. He has a great presence about him, along with a welcoming humility – similar to that of our former Patron, Doc Cecil Moss. They are both cut out of the same cloth.

Neville’s journey from humble beginnings – working at a small bottling plant in Zambia – to arguably being the most successful CEO of Coca-Cola International, is inspirational. It shows that regardless of your situation, hard work and commitment can create the opportunities needed to succeed.

The lkey family is honoured to have Neville as Patron of our club. A man with passion, inﬂuence and experience who will complement our team of stalwarts dedicated to moving this Club to new heights. His journey gives us the hope that from humble beginnings we too can revive the Club and restore it to its former glory days of full trophy cabinets and an even fuller pub!

The 2018 Varsity Cup Kicks-off in less than 2 weeks! Get your tickets!

What Does UCT Rugby Mean to You: Jason Klaasen
Scroll to top