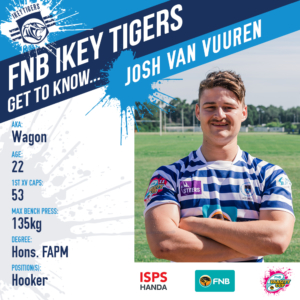 This week we sit down with another veteran of the UCT rugby club, Josh Van Vuuren; affectionately known as Wagon. This sports fanatic and Kearsney College alum is a force to be reckoned with.

While his mates might joke that he is veteran of the bench, he was the hero of the final minute try scorer against CUT; maintaining the unbeaten status of the Tigers this season.

Van Vuuren is a self-proclaimed sports fanatic; confirming that he knows exactly what is going on in each sports at any given time.

If he isn’t making wild (and unlikely) sports bets, you might find him watching Netflix. While Van Vuuren’s obvious sport of choice is rugby, he played first team cricket in High School and still enjoys the sport.

Although Van Vuuren doesn’t have any superstitions or pre-match rituals, you’ll find him in the kitchen enjoying a big dinner on Sunday night (don’t we all?). He tries to sleep in on Monday morning before the game and just take it easy.

Van Vuuren doesn’t see himself going any further in his rugby career, he attributes rugby to the success of his academic career, saying that he plans on using his rugby CV (and his academics) to get into an overseas university, with aspirations of completing a masters degree.

“I think some of the best memories of varsity is on Monday night, and sometimes after the game… I plan to just make the most of the few I have left.”

Currently studying an honours degree in FAPM, Wagon might be running your future investments so we suggest you stay on his good side. Until then, check him out on the rugby field doing his thing in the blue and white hoops.

Next week the Ikeys take on FNB Shimlas on 16 March on The Green Mile. Kickoff at 7pm.