The Ikeys have played 4, won 2 and lost 2 and are currently in fourth position. Both defeats were by a small margin of 4/5 points and were games that could have been won. In particular in the game against Shimlas, the Ikeys created plenty of scoring opportunities to win and close out the match.

One of the features of this year’s Varsity Cup is that most of the teams are close in strength and other than Maties, who are unbeaten, any one side can win or lose any game. It has meant that the smallest of margins, a missed pass, a misdirected kick can cost a team a game.

The thing that has stood out for the Ikeys in this year’s Varsity Cup so far, is the fighting spirit and physicality of the whole team. The forwards have also dominated every pack they have come up against in the VC this year. Even in defeat you cannot be anything but proud of the effort and courage of the players wearing the blue and white stripes. 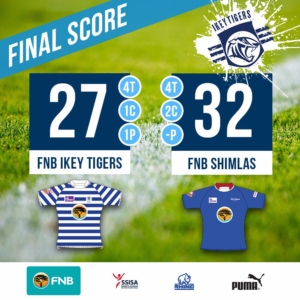 Just as he did in the previous match, FNB UCT’s Nyasha Tarusenga, scored an early try, putting the hosts in an early 5-0 lead. It wasn’t long after that and Karl Martin capitalised on a penalty slot over and extend the lead to 8-0 as FNB UCT were in control early on.

FNB UCT continued to dominate the scrums with their forwards asserting their authority at the breakdown. But soon FNB Shimlas were on the board as winger Xamlashe Sango scored a try, which started in the FNB Shimlas half, rewarding his team with seven points.

Athenkosi Halom was stamping his name on the game, and it wasn’t long before FNB Shimlas’ other winger had his name on the score sheet as well. Another seven-point try meant it was the vistors who now led, 14-8. But FNB UCT’s powerful hooker, Cuan Hablutzel crashed over just before the break. A conversion by Karl Martin meant that FNB UCT had the ascendency heading into the tunnel, 15-14.

Just two minutes into the second half and FNB UCT were firing on all cylinders again. A seven-pointer by the lanky Duncan Saffy extended the lead to 22-14. But FNB Shimlas were desperate for a victory and the final quarter was all about the visitors. Tries by Ayabonga Oliphant and Carel Coetzee sealed the victory despite a second try by Hablutzel.

It ended 32-27 to FNB Shimlas as the Free State side jumped to third on the log with FNB UCT in fourth. 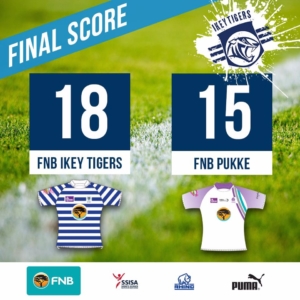 The hosts took a 5-0 lead when Nyasha Tarusenga scored the first try. But it wasn’t long before Schalk Hugo narrow the deficit with a penalty.

As the first stanza concluded the match unfolded into a scrappy affair with Pukke’s Estehan Visagie and UCT’s Duncan Saffy both sent to the sin bin.

In the second half, Ikeys continued with their attack and had a second try for a 12-3 lead.

With just minutes remaining on the clock, the visitors levelled matters after a Johan Retief scored a converted try to bring the score to 15-15.

In the dying minutes, UCT were awarded a penalty, which Lubbe slotted to hand his side victory and four valuable points.

The scorers for UCT – Ikeys 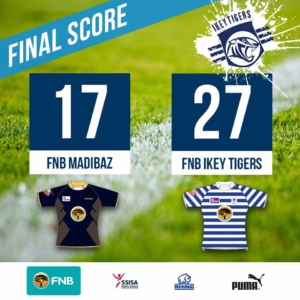 Simon Bolze handed the home side an early lead with a seventh-minute penalty before UCT took the lead thereafter through a Cuan Hablutzel try and Karl Martin penalty by the 26th minute.

Bolze then added a converted try of his own, but another Martin penalty before the half-time break handed the visitors a slender 11-10 lead.

The Madibaz came out firing and took the lead early in the second half through a Siphumelele Msutwana try, but that lead and any hope of victory was wiped out when Pieter Schoonraad and Nyasha Tarusenga scored to secure the bonus point win. Martin and Lohan Lubbe were on song with the conversions. 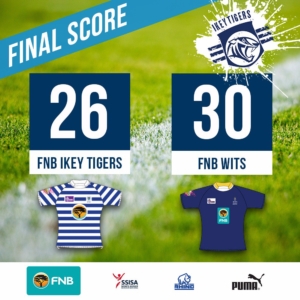 Wits turned defence into attack early in the encounter to grab the opening try when Kasande Kapepula raced over from inside his own half to hand his side a 9-0 lead; but UCT hit back when a well-executed driving maul from a line-out ended with Nyasha Tarusenga dotting down to trail 7-9.

The home side took the lead shortly after when, after an attacking five-metre scrum, Wits’ defence crumbled and referee Egon Seconds awarded UCT a penalty try as they took a 14-9 lead at the half-time interval.

Wits regained the lead soon after the restart as Constant Beckerling went over from close range. UCT fullback Brian Martin restored the home side’s lead soon after as they went into the second strategy break with a slender 23-16 lead.

Wits ended the match in perfect fashion as Chris Hume and AJ van Blerk dotted down late in the day to secure a come-from-behind victory.