The Ikey Tigers 2018 Varsity Cup Campaign kicks off on Monday 29 January at the Green Mile against Wits. Here we look at the upcoming fixtures and chat to Head Coach for 2018, Christiaan (Essie) Esterhuizen, about the team’s preparations going into the 2018 season.

Q – How is your squad looking and are many of last year’s 1st XV players returning this year?
The squad is very similar to last year. We only lost a handful of players – so we will go into the campaign with a more experience squad than 2017.

Q – What are the main focus areas in preparing for this season?
We want to improve our decision-making in general. So our aim is to expose the players to more ‘’match’’ scenarios during training to improve the execution under pressure.

Q – What lessons have you learned from last season?
Opposition analysis and mental coaching needs to be done properly and something that can never be neglected – this is where you can get the edge over opponents.

Q – You coached UCT in the Varsity Cup last year, what in your opinion can South Africa do to break the mould of conservative rugby and be expressive a bit more? There seems to be a lack of creativity after players leave Varsity Cup or school to play at higher level?
A general improvement in skills will automatically lead to more flair. Coaches on their part need to encourage players to use their skills and allow them the freedom. This is easier said than done – the problem is that coach’s jobs are on the line and will tend to go back into their shells when the pressure builds. 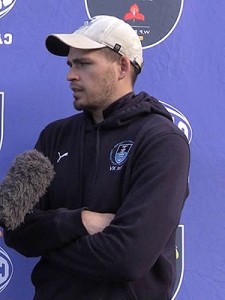 The focus is probably too much on shape and systems – the speed of the game is increasing each year and the focus must be more on unstructured scenarios and teach players to make good decisions in ‘’chaos’’. Players must rather react to the speed of the ball supposed to the shape and system. Players must be taught to execute their skills when fatigued (which will allow teams to appear more expressive). I think if we can get these things right the perception about SA being conservative will change quickly.

Q – Any other interesting news around the Varsity Cup that you think may be of interest to Ikey supporters?
The will be a couple of unique Varsity Rule innovations. There is talk of bringing in a Power Play where both teams will play with 13 players vs 15 players for 3 min each. Naturally, we will have to adapt to these rules and try and leverage them to our advantage.

Thanks Essie and good luck to you and the team for the 2018 Varsity Cup Campaign.