Doc Moss – My Life in Rugby

You are here: Home / Cecil Moss Tribute / Doc Moss – My Life in Rugby

Doc Moss My Life in Rugby

‘Books are for nothing but to inspire.’

John Le Roux stuck to his guns in the quest to persuade Doc Moss to tell his story pretty much as he approaches most things; with determination, patience and considerable skill. To get Cecil to agree to tell the Cecil Moss story was the equivalent of chipping away at a nugget until the gold was available for all to enjoy.

Silke Colquhoun, esteemed journalist and editor, used her considerable skill, charm and feminine wiles to winkle out the stories about 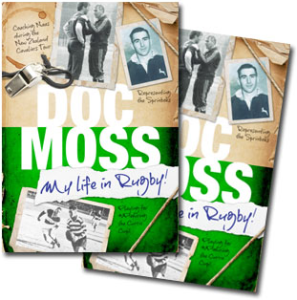 Cecil we all wanted to hear and read about. Silke recalls one incident which was so typical of Cecil, when he made sure that he greeted her with an umbrella to protect her from a torrential Cape Town downpour, when she was visiting him at his home. Two things emerge from this incident. Cecil was always the consummate gentleman, and he could not resist being gallant toward a lady when given the opportunity.

The book is not just another book about a famous rugby personality, describing his rugby career and early life. It captures an evocative piece of South African history, oft repeated in the twentieth century when the significant contribution the ‘Boere Jode’ made in the development of South Africa, unfolded. From his early days at the famous Cape Town school, SACS, to his rugby career at UCT and then in the old Natal, to serving in the military up North as a proud South African, followed by gaining Springbok colours in 1949 against the fabled All Blacks, and then carving out a distinguished career as an anaesthetist, combined with becoming a highly regarded and successful rugby coach, Cecil tells a compelling story. 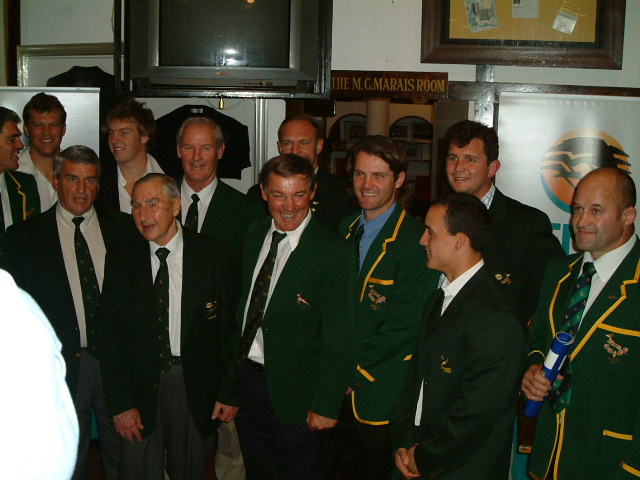 A small group of Ikeys gathered at the Cape Sun a few years back, prior to the annual UCTRFC rugby dinner, to celebrate the publishing of the book. It was an emotional moment as we all felt a sense of relief that Silke, with the backing of John Le Roux and supporters, had helped Cecil to tell his story. 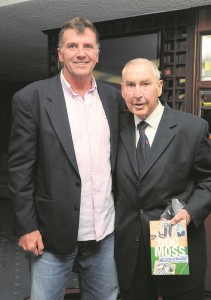 It was worth the wait. The best way of absorbing and appreciating the highs and lows, the rich diversity and spectrum of adventures contained in the life of Cecil Moss, is to read the book, and to share the tributes from his legion of friends, players he coached, colleagues in the medical field, and simply people who wanted to say what this remarkable man meant to them.

Listed below are some of the tributes paid to Cecil in the book, and at the memorial service held shortly after his death in November, 2017, at the age of 92. We all wished we could have enjoyed Cecil’s company more often, and for longer periods of time, but the time we did share with him was very special. For that we are all grateful. I am utterly convinced that Cecil will be greeted by his dear friend, the one and only Pat Tebbutt, and that the two of them will chat away about many things, and many people.

‘I have a high regard for Cecil, particularly as I recall him taking me to hospital when I got badly hurt in Newlands for my last game of rugby.’ – Raymond Ackerman

‘Doc influenced a large spectrum of rugby players; not only as a coach but also as a man.’ – Mike Hoard

‘Doc, your unconditional support and belief in us gave me the wings to fly-your experience, your passion and loyalty true lessons for life.’ – Mikey Kirsten

‘When asked by Paul and John Dobson why I was putting so much into getting Cecil’s Memoirs out, my answer was simply, my love for the man.’ – John Le Roux

‘What an honour to succeed you as President of UCTRFC.’ – Dugald Macdonald

‘Doc Moss was, by some distance, the best rugby coach I ever had; passionate, intelligent, caring, hard-working and inspirational.’ – Nick Mallett

‘Thank you for your role in my life.’ – Ian McCallum

‘Cecil is an icon of decency and richly deserves all the acclaim.’ – Bennie Rabinowitz

‘One of the most exceptional men I have ever met.’ – Alan Solomons

‘With utmost gratitude for Doc Moss’s massive role over so many years.’ – UCTRFC

‘A fine captain of Natal and a worthy Springbok wing, manager, and coach.’ – Sharks Rugby

‘Doctor Cecil Moss has a commitment to rugby and patients with passion from the heart.’ – Life Healthcare Group