You are here: Home / Old Boys / A Tribute to Preston Robertson

Preston’s first game of rugby was for Prince Edward School U13 against Umtali U13 in 1956, and his last game was for Rhodesia against Eastern Province in a Currie Cup semi-final playoff in 1972.

Preston was one of a few players to ever play against the All Backs back in the 60/70’s when international teams only got to play each other every few years. In 1970 the All Blacks toured South Africa, and this included a game against then Rhodesia. The All Blacks beat Rhodesia by 27 points to 14. Rhodesia scored more points against the All Blacks than any other team on this tour outside the tests. This was a New Zealand team that included legendary players such as Meads and Lochore. 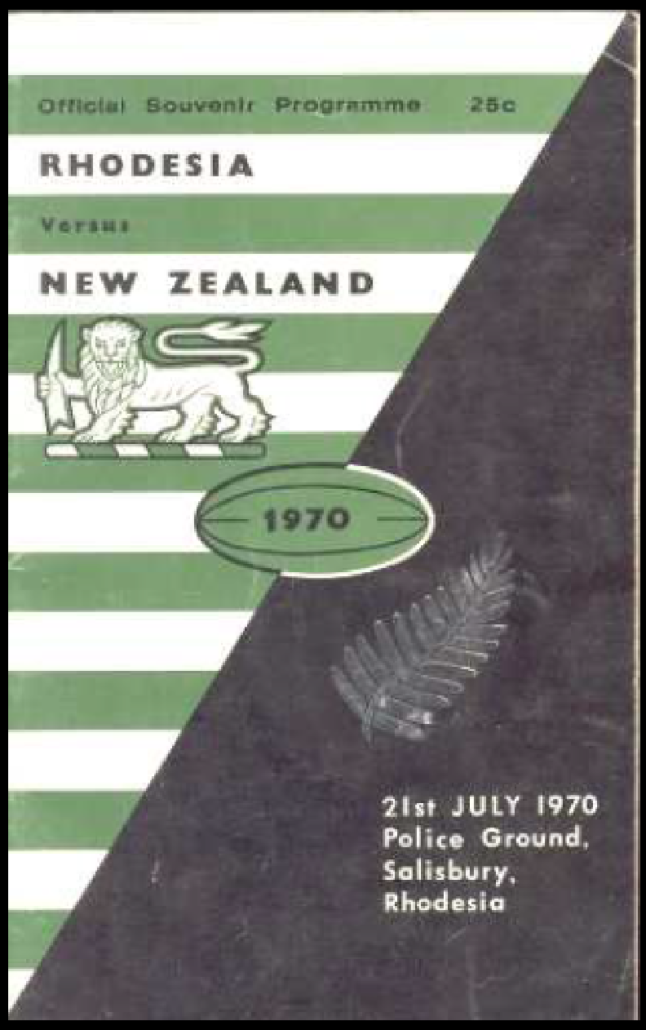 The article on the game had this to say about Preston “ Preston Robertson, who had twelve games for Western Province while playing for the University of Cape Town and Villagers, was a lively loose-forward who would have been better if he had been fit enough to be lively more often. Roberson, Varkevisser and Murphy were considerable nuisance at the back of the lineout, from which point New Zealand, with better control, could have hoped to develop many attacks”.

Preston was known to be a fitness fanatic, so I am not sure how accurate this report was! Ian Robertson, Preston’s cousin. who went on to be a Springbok, played fullback in the same team.

We felt it good to retell one of Preston’s Ikey highlights which he shared with us,  it was a game that was well stored in his memory, mainly because the Ikeys won the game but more importantly because it was such a fast paced, ferocious match.

The game which is the centre of the story was played in 1966 between UCT and the touring Glenwood Old Boys as a pre-season friendly. The UCT side was fairly inexperienced, but it was the core of the team that went on to bigger things over the next three years, out playing the Maties in 9 games (won four, drew three, lost two).

The Glenwood Old Boys team was heaving with talent and experience. Rodney Gould the incumbent Springbok fullback, Errol Patterson and Pat Stack in the backline. Their forwards were their strength with Willem Labuschagne, Don Walton and Barry Burnell in their front row. Lock Len Fry had a couple of Natal caps and Ian Grant (No.8) and Don Campbell (flank) had both played inter-provincial rugby.

It is critical to mention that Walton was the incumbent Springbok hooker, and Labuschagne had previously been capped as a Bok front ranker. Something else that should be mentioned pertains to the scrum rules of the day. None of your current crouch, touch, pause, engage and then the scrum half puts the ball in under his locks feet or sometimes even the eighth man’s feet. The scrum used to go down quickly and the scrumhalf had to put the ball in the middle of the scrum tunnel at least a shoulder length into the scrum, at which time, and not before, the hookers would strike for the ball.

According to Preston and other players, ‘Labuschagne was determined to shove Gus Enderstein’s head up his rear end the whole game’. The game started at a wicked pace and never let up for the whole game. One Ikey lock (Joe Ireland) and eighth man (Gavin Birch) were concussed during the second half and had to be repeatedly pointed in the direction of the ball. The team could not afford to let them go off as there were no reserve benches in those days. 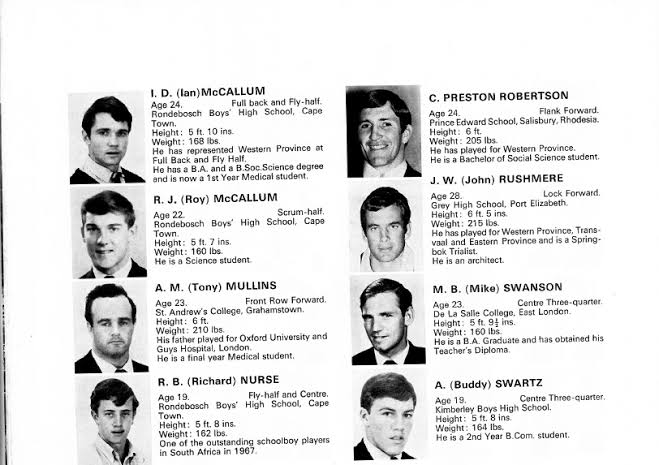 The amazing feature of Willem screwing Gustav every scrum, was that Gus ended up so low in the scrum that Don Walton very rarely got any sight of the ball. This enabled Mike (aka The Silver Foot) to rake back the ball including seven of the team’s own put-ins. “That is how the legend of Seven Against the Head got into the annals of UCT rugby. If Gustav had not been so fit and pliable, Harold would never have that famous scalp on his belt”.

Preston and I, or as I sometimes called him “Press ups”, shared a common background in Rhodesia and also at UCT on a rugby field.  Whilst our paths diverged, we were in occasional contact and when I retired, re-established the bond built on chasing an oval ball.  Individuals who are real people with a depth of character and a strong spirit of friendship, are few and far between.  Preston, my rugby friend, was one of them.

Preston was a very strong, fit, competitive and hard-working Ikey loose forward.  He always gave 100%, was very well-liked and didn’t stand back from opponents trying to bully the Ikeys.  Preston always carried a note of the scores in his pocket and was proud of the fact that when he played in the Ikey team against Maties, the Ikeys won more often.  He was a great guy to go on tour with as he was seldom at a loss for a quick-witted, fun comment about a fellow team mate.  A great Ikey, who will be sorely missed.

My condolences to Sue and the whole Robertson family.  What a man my friend Preston was and what a great friend for so many years!  The memories flood back.  He was a snappy dresser and was quick to berate the rest of us who weren’t.  He was never short of an opinion and could tell a really good joke.  His toothy grin and chuckle were never far away.  Farewell, old friend.

Very sad, he was a good man and I have many memories of the sixties!  Regards to all.

Sad news. What a wonderful character. Who can ever forget his Lurker story. Will miss him and his articulate use of words.  Fondest memories.

The news of Preston Robertson’s death is not easy to digest. We go back a long way. Brought together courtesy of the uniting chemistry of rugby we got to know and enjoy each other’s company beyond the conversations around our shared love of the game. Outwardly serious, never scruffy in dress or word, his “no-nonsense” world-view belied a philosophical and playful streak that appealed to me. I cannot remember any time with him, one-on-one, when we did not laugh or chuckle about some event or other that we had shared. Here is one story I will not forget, and for which I will be eternally grateful to Preston for its positive outcome. We were partners in a crime.

In early 1967, after a temporary farming interlude in Zimbabwe (then Rhodesia) I returned to Cape Town to begin my studies in medicine. Preston, driving his own vehicle, was on his way back to UCT to complete his studies in commerce. There was a problem, however, of which Preston was acutely aware. With me in my vehicle was my four-month old dog, Wedza (named after the area in which I had been farming). The problem was that I had no veterinary clearance for Wedza to enter South Africa. If caught, Wedza would have been impounded, or worse … put down. As for me and my co-conspirator … who knows? Fast forward to the Beit Bridge border post and there, in the pre customs and immigration parking bay, Preston was waiting. With Preston volunteering to stay in my vehicle as a pacifier of a half-drugged yet restless puppy, I completed my exit duties. With the dog scarcely contained beneath my legs, and with nothing to declare, I crossed the border into South Africa. With a successful repeat of the procedure on the South African side of the Limpopo River, we ‘beetled’ our way to Cape Town … unscathed and hugely relieved. Thanks for that Preston.

In a letter to his wife Sue, following his death, I wrote: I am grateful that Preston was a part of my life, albeit, in recent years, sporadic. He set high standards for himself and I valued that about him.

Tonight I will raise my glass to a great competitor, friend and without doubt, a good man.

“Until we meet again”.

Shocked, sad and full of memories of a remarkable man, a very good rugby player, a considerable intellect…….oh, and so much more.  Go well Preston. Condolences to his family and friends.

Lessons from All Black Rugby Culture
Scroll to top